Triangulation  is just what it sounds like, it is making triangles. Those of you who have paid attention in geometry classes will know that we can calculate one of the sides of a triangle based upon the angle which is opposite to it.

Don’t let that geometry reference put you off, let’s take it one step at a time and you will hopefully realise that this is actually quite simple.

Imagine we are looking down at a map with a big Triangle drawn on it, A represents our current position, Z represents where we want to go, M represents a landmark that we can see from anywhere on our route … let’s say it is a Television Mast. 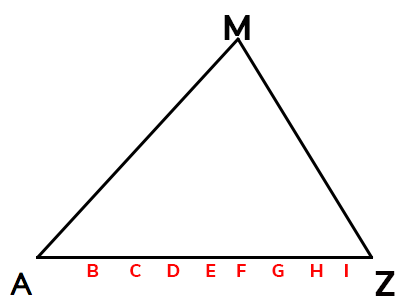 In a previous lesson, we discussed bearings (Click here to revisit), in the above example, we are walking along a bearing of 90 degrees.

At the start of our walk (A), the television mast (M) is at an approximate bearing of 45 degrees from our current position.

As we begin our walk from A to Z, we stop at various points along the way (B to I).

When we stop at point B, we again take a bearing on the Television Mast, we will discover that the bearing has changed, let’s now say it has a bearing of 35 degrees.

We do the same at point C and we now learn that the Television Mast has a bearing of 25 degrees.

When we reach point F, we note that the Television Mast is at a bearing of 0 degrees (sometimes referred to as 360 degrees).

What would you estimate the bearing of the Television Mast to be when we reach point H?

No, that would more likely be the bearing around point D or E.

Probably not, though you are close.

Yes, that is probably a good estimation.

Probably not, that is more likely the bearing from point I.

By the time we make it to Point Z, the Television Mast is probably at a bearing of approximately 325 degrees.

This use of a bearing is a great way to tell us when we have walked a certain distance. Imagine in the above example if our instructions were to start at point A and head along a bearing of 90 degrees until the Television mast is at a bearing of 12 degrees, from that point we then take the path at a bearing of 180 degrees.

It doesn’t matter how fast or how slow we walk, a bearing on a landmark should give us a reasonably accurate idea of where we are along a certain path.

It’s that question that we never really want to ask ourselves, but it is also one that we need to know how to answer.

Imagine, a group of Scouts out on a hike, fog starts to settle in and so we attempt to make our way to safety. As the fog gets worse, we lose our bearings and so rather than wander around aimlessly, we pitch camp.

In the morning, the fog has cleared and so we strike camp … but where are we?

We look around ourselves and we notice a radio transmitter up on a hill … we take our compass out and note that it is on a bearing of 65 degrees. 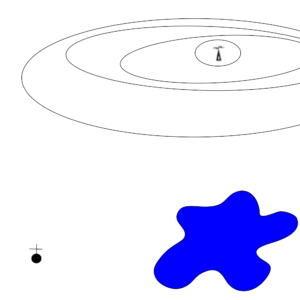 and we draw a line on a bearing of 65 degrees from the transmitter. on our (really simple) map. 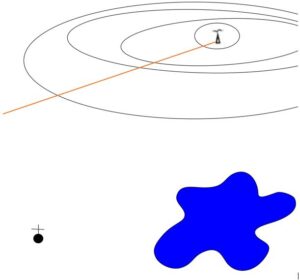 So we now know that we are somewhere along that line, but are we 500m from the transmitter? or a kilometre? or 2 kilometres? 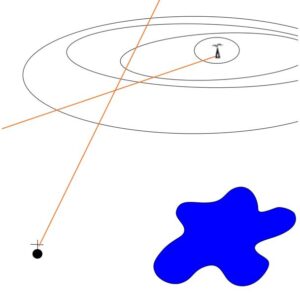 It is highly likely that where the two lines cross represents our current position.

To be extra sure, you may look for a third point of reference, maybe you see a lake, you may look at the left hand edge of the lake and take another bearing, obviously the edge of a lake is not as accurate as a fixed object, but if you can find nothing else then it is a reasonable choice to confirm your location.

In this example, the left edge of the lake is on a bearing of 137 degrees and so we mark this on our map.

This gives us 3 points of reference and in this example, all 3 lines cross at the same point. You can have confidence that this is your current location.

GPS would be easier

Of course if you have a GPS system or a Smartphone and the battery still has a charge in it, then you could use this … but all your modern GPS systems do is exactly the same, though instead of looking for landmarks, they look for satellites orbiting the Earth and they take a bearing from your device to the satellites.

The more satellites your device can “see”, the more accurate your position.

But never rely on your devices, there are a number of circumstances why they may not work, so know how to triangulate your position manually … if you have a signal/battery then you could always cross check your findings with your GPS device too.