When I became Group Scout Leader of Sale Central Scout Group in May 2019, I had no idea how rich the history of the group was, I knew that it was formed from a merger of other groups but didn’t even know their names, I had only been involved in Scouting for 4 years at the time so knew nothing of what had brought about the merger, but having an interest in Scouting from yesteryear, I was determined to find out more.

As far as I was aware, no books had been written, my only source of knowledge was my friends in Scouting, those who had been around at the time of the merger. By coincidence, I then learned of a gentleman by the name of Ian Billingsley who was in the process of creating a Facebook group called the 1st Brooklands Scout Troop. As a Leader at 2nd Brooklands Scout Group … I was intrigued to find out more. I didn’t know then that 1st Brooklands was one of the three groups that were merge into Sale Central Scout Group.

I soon learned that 5th Sale & Ashton  was another of the three, with 2nd Ashton completing the trio … slowly I discovered more an more about these wonderful Scout Groups and what a seemingly uncompassionate demise to be merged into a single group.

In 2005, Three Scout Groups with a rich and proud history merged into one Group and so Sale Central Scout Group was born.

1st Brooklands Scout Group, 2nd Ashton on Mersey Scout Group and 5th Sale and Ashton Scout Group, who had each been in existence almost since Scouting itself was born, had fallen on challenging times, membership was dwindling and there was a very real possibility that some, if not all of these groups would be forced to finally close their doors for good.

Obviously with each having such a proud tradition, none of them wanted to cease Scouting and yet understandably, each was reluctant to lose their identity.

Their merger into Sale Central Scout Group was seen by some as disrespectful to their own unique history, but for others it was seen as giving Scouting a chance to continue.

The Neckerchief of Sale Central is made up of the three individual Neckerchief colours of our founder groups as is Sale Central’s Group Logo which represents the groups coming together with Scouting (represented by the Fleur de Lis) at the heart of their amalgamation.

Read more about these groups by following their respective links. 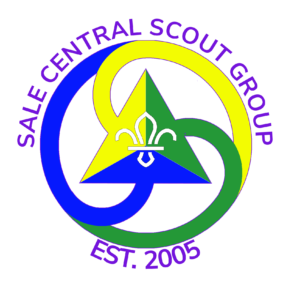